Posts Tagged With: growing up

Self-knowledge and Discovery of Self 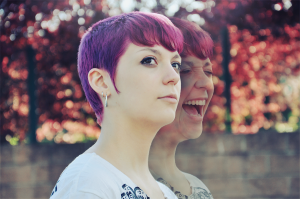 I didn’t know I had a shy bone in my body until I was 11 years old.

Now, that’s a long time to be around and not know something like that about yourself. So, how did I find out this little nugget of wisdom? By attending a new school for the first time in my life.

I went two week without speaking to anyone other than the teacher and no one showed any kind of interest in me – at all. I was the outsider. In my old school, no matter how many times I moved to a new house I had my foundation set in stone – my Grandmother’s house was “home” and my elementary school an extension of that and I was the kid everyone knew.

So imagine being ripped from the life you’ve always known and tossed into a strange place where there were no footings, only quick sand. I learned a lot about myself marooned at that new school (and the next one I attended prior to high school). I am both strong and weak; smart and naive, loving and spiteful, shy and bold.

It’s hard enough for a girl to go through puberty at such an early age and deal with all of these conflicting sides to my personality but in a strange environment with hostile peers it became a nightmare. Let’s just say there were moments of glory (as lead in the school-wide Christmas Play) and moments of despair (wondering if I should just run away).

My main character in Time’s Tempest, Taya, faces whether or not she truly knows herself and how the events of her childhood helped shape the woman she became – be it for good or bad.

This fluctuation in knowing yourself and self-discovery do not just happen at puberty. Throughout our lives we grow and change and often it happens without our knowledge – one day we’re just different: high school, break-up, marriage, death of a loved one…

However, I must say that all throughout my life the one think that’s always remained the same is my contradictory nature 😛

What about you? Do you have a constant?